The Addams Family 2 is a 2021 computer-animated supernatural black comedy road film directed by Greg Tiernan and Conrad Vernon, co-directed by Laura Brousseau and Kevin Pavlovic,[4] written by Dan Hernandez, Benji Samit, Ben Queen, and Susanna Fogel with a story by Hernandez and Samit,[5] and based on the characters created by Charles Addams. It is the standalone sequel to the 2019 film, The Addams Family, and stars the voices of Oscar Isaac, Charlize Theron, Chloë Grace Moretz, Nick Kroll, Snoop Dogg, Bette Midler, Javon Walton, Bill Hader and Wallace Shawn. It tells the story of the Addams family as they go on a road trip. 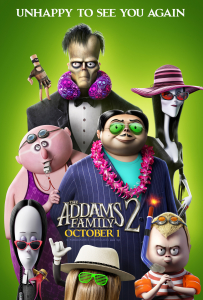