Breakfast at Tiffany’s is a 1961 American romantic comedy film directed by Blake Edwards, written by George Axelrod, adapted from Truman Capote’s 1958 novella of the same name, and starring Audrey Hepburn as Holly Golightly, a naïve, eccentric café society girl who falls in love with a struggling writer. It was theatrically released by Paramount Pictures on October 5, 1961, to critical and commercial success. 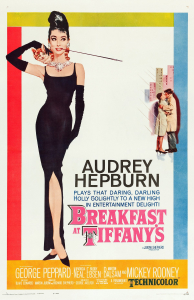