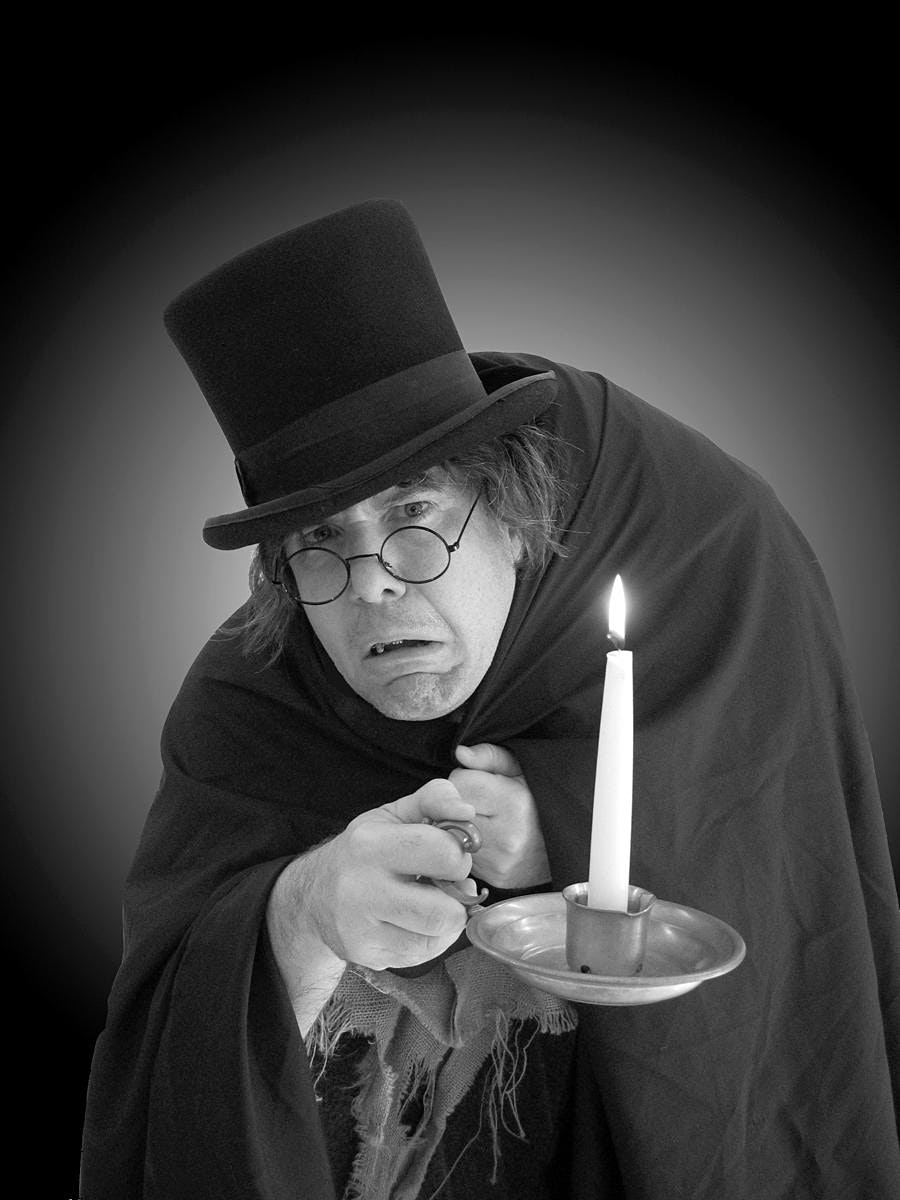 Prior to Mike Miclon becoming the Executive/Artistic Director for Johnson Hall, he ran The Oddfellow Theater, a small theater in the woods of Buckfield Maine. He and his group built a reputation for hilarious improvised performances. This broadcast of the their comedic version of “A Christmas Carol” was one of the most poplar shows at the Oddfellow and was sold out every show for seven seasons.

The Oddfellow Theater’s version of “A Christmas Carol” mixes the basics of Dickens’ story with comedic improvisation, audience participation, and just the right touch of sweetness to make for the perfect holiday performance.

This show is great for all ages but if rated it would most likely be considered PG.

This show was filmed in standard definition, so the quality is not HD, but it is still very watchable.

This review was written by Paul Kuritz, Dirctor of Theater at Bates College

If Garrison Keillor’s Praire Home Companion and Charles Ludlam’s Ridiculous Theatrical Company ever sired a child, it could very well be The Oddfellow Theater of Buckfield, Maine.

Born in 1996 through the efforts of Kim and Mike Miclon, the company has been presenting a variety of “theatricales”, their latest being Bah Hoonchbach! A Very Odd Christmas Carol. Like Kiellor’s menagerie, Miclon’s includes audience participation and interaction (Bob Cratchit’s Christmas dinner allowed each of his 156 children named “Bob” one piece of popcorn apiece), and references to the locals, especially Virgil Tilton (whose freezer specials at next door’s Tilton’s Market sustained me and mine while I lived in Oxford County). Like Ludlam, the performance style deliberately and spontaneously breaks apart to reveal the artificiality of the whole thing. And like Keillor and Ludlam, the burlesque humor makes the pathos all the more irresistible. This was quite simply the most entertaining and moving Christmas Carol I have ever seen on stage. (And my wife and son agree.) In fact, I haven’t seen anything as funny and moving as Miclon’s Dickens classic since I saw Charles Ludlam’s Camille in New York. Miclon’s bravura depends on his amazing supporting cast, especially the sublimely understated Fritz Grobe.

The late great Benny Reehl’s legacy of the Buckfield Leather and Lather Show (the most influential of all of the 1970s New Vaudeville enterprises) lives on and grows in this company, as well as with people like Robin Mello, telling her stories in Wisconsin. (Benny and his wife, Denise, each directed plays for me at Bates College.) Their skills are evident on the Oddfellow stage; their kindness is evident in the Buckfield theater lobby as the cast greets the patrons as they exit the theater. (A word about the patrons: the audience is made up of real Americans: working-class moms and dads, kids of all ages, oldsters, too, all of whom delight in this company.)

By Paul Kuritz, On Theater & Film

IMPORTANT PLEASE READ- This video will be broadcast live to all who have the unique ticket link and password associated with your purchase email address.

Each unique link and password will be sent out through e-mail by 5:00 on December 21, 2020, to ticket holders. The Link will be sent to the email associated with your ticket purchase. Make sure you have access to that address on the day of the show.

This link will be live from December 21 at 7:00 through Christmas Eve and can be watched anytime during that time.

Each ticket purchased covers your household.